On Saturday 6/12/2021 at 3am CST our development team will be performing scheduled maintenance on our servers. We anticipate this maintenance to last approximately 30 minutes, and during this time the Pace Scheduler site will be in read-only mode. This means you may still view your schedules, but certain functionality of the site may not be accessible while we are performing this maintenance. As soon as maintenance is complete, all site functionality will be back to normal automatically and you do not need to do anything.

If you are a Supervisor with "Edit Schedules" permissions or are an Admin in the system, you have always had an Admin/Supervisor form when you right click on certain cells. This "Admin/Supervisor Form" is different from the form that non-admins and non-supervisors see as it is much more powerful. As you are likely well aware, this "Admin/Supervisor Form" gives you permission to put Time Off, Overtime, etc. directly on the schedule without requiring another user to approve it (essentially, you are the one approving it since you were granted the Supervisor or Admin permission to do so). While this is ideal for most scenarios, there may be instances when you want access to the regular "Request Form" that normal users see instead of the "Admin/Supervisor Form" so that you can see what the non-admins and non-supervisors see. Because of this, we have added the ability for Admins/Supervisors to be able to view the regular "Request Forms".

To view this "Request Form", simply toggle the Request Form button after right clicking on a cell: 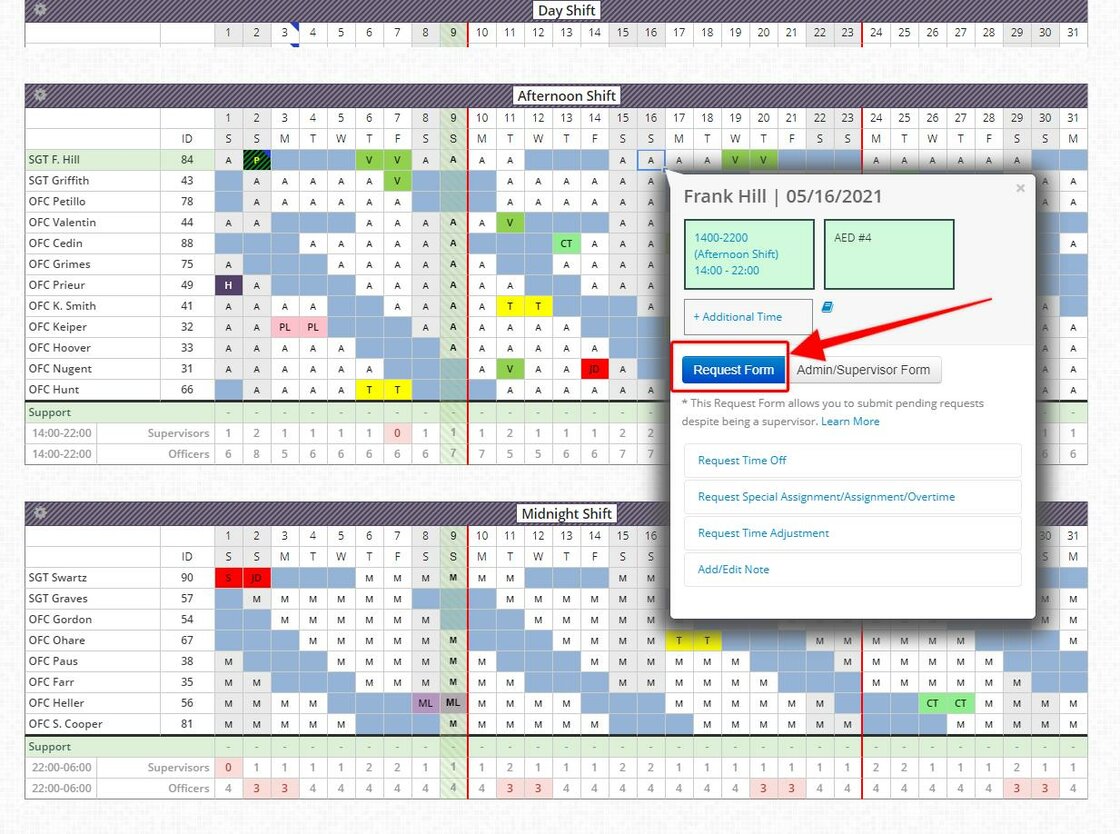 If you submit a request via this "Request Form", the requests will always go in as "Pending". Depending on your permissions, you may be able to go to the "Pending Requests" page and approve the request you just put in.

We hope this update will be useful to you!

At pace scheduler we are continuously optimizing and evaluating our platform to bring you and your team the latest features for workflow efficiency,

This month we are excited to announce our newest feature, Electronic Timesheet Sign-offs for you and your department.

With this feature our goal is to make it as easy as possible for you and your team to streamline the approval process involved with reviewing timesheets, and getting sign-off from both employees and supervisors.

If your department was previously printing off your timesheets and chasing down your supervisor for a signature think again. Now you and your supervisors can simply login to your pace scheduler account, navigate to time sheets, and conveniently provide your electronic signature all directly through our platform.

But wait theres more! Your team can also flag any issue which may arise, and exchange notes until the timesheet in question is resolved and signed.

If you have additional questions, be sure to checkout the Timesheet Signature article in our Support Center, or reach out to our support team at support@pacescheduler.com

We're excited to announce that the Pace Scheduler Mobile App is now available!

You can download the app by going to either the Apple or Android App Stores and searching for "Pace Scheduler". It's free for you to download and use.

While the app is not meant to be a full replacement for the desktop version of Scheduler, we hope it will be a useful sidekick to it, allowing you to quickly check your schedule, submit time off, approve extra coverage, and more. The app is synchronized with your Pace Scheduler website, and updates in real time.

If you have additional questions, be sure to check out the Mobile App article in our Support Center.

We plan to improve the app even more as time marches on, so if you have feedback please message us at support@pacescheduler.com

This is a friendly reminder that Daylight Saving Time falls back on Sunday, November 1st at 2:00am. Pace Scheduler can (optionally) account for DST. If you would like to see how we handle DST, and how you can configure it to behave, please check out your Site Settings page in the Admin Tab. The DST setting will be near the bottom of the page. Note that you must be a site admin to access the page. 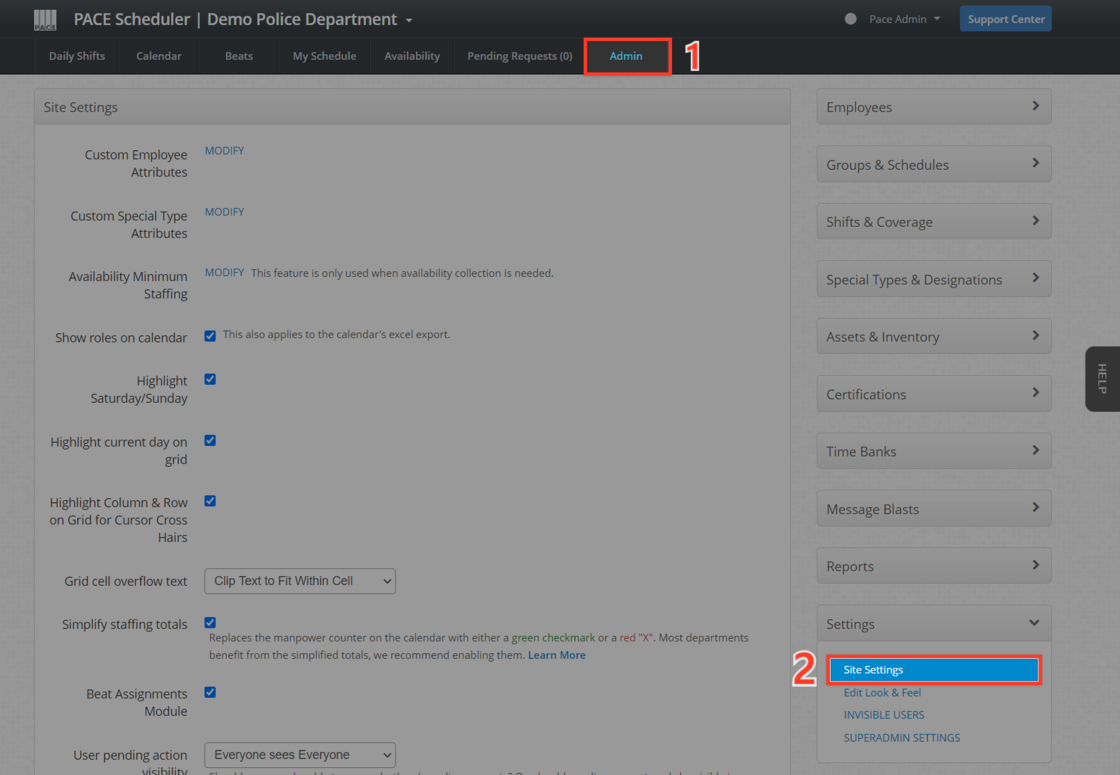 If you have additional concerns, please see our support article on the subject here.

Whew! It's been a while since we've posted here, but we've been hard at work! Here are some of the updates we've deployed over the past few months to keep you abreast of the situation.

We've added a new filter bar on the Pending Request page. You can now filter requests to your heart's content, including the ability to filter out any requests that weren't submitted to you specifically.

Previously, when using the "Remove shifts" feature, specialty shifts wouldn't be removed, such as Time Off, OT, etc. Much of the time that approach made sense, but much of the time it didn't. Now you can choose! 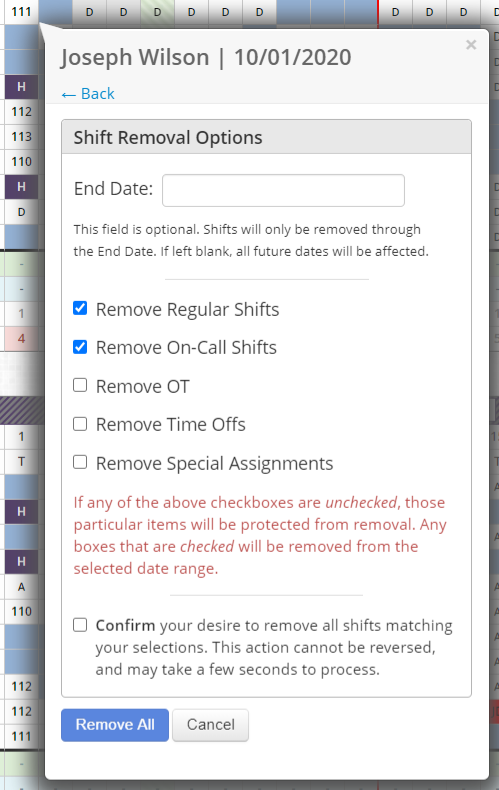 If you only allow your users to request certain items on the schedule, they would previously be completely hidden from that user's calendar menus. This was great for the officer, but limited supervisors, since they sometimes do need to manually schedule those restricted items for someone that can't request it themselves.

To account for this, if you have schedule editing permissions over someone, you will now see those restricted items listed in a slightly faded grey color with an info icon next to them. Supervisors can still manually assign these items, but the regular users cannot request them. 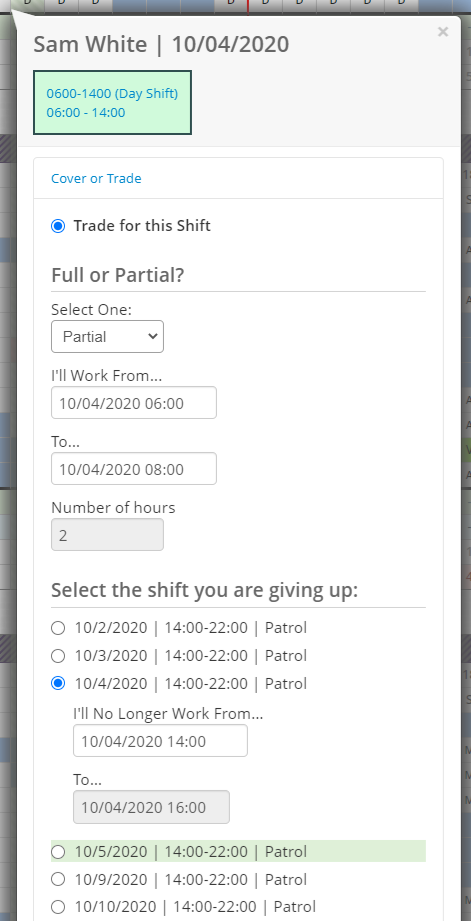 Time Banks can now be assigned on a user-by-user basis. So if your officers have different time banks than your civilians for example, you can now assign the relevant banks to each of them. Previously, all users saw all banks, which caused unnecessary clutter and confusion. You can also now customize the order that time banks are listed on your site. 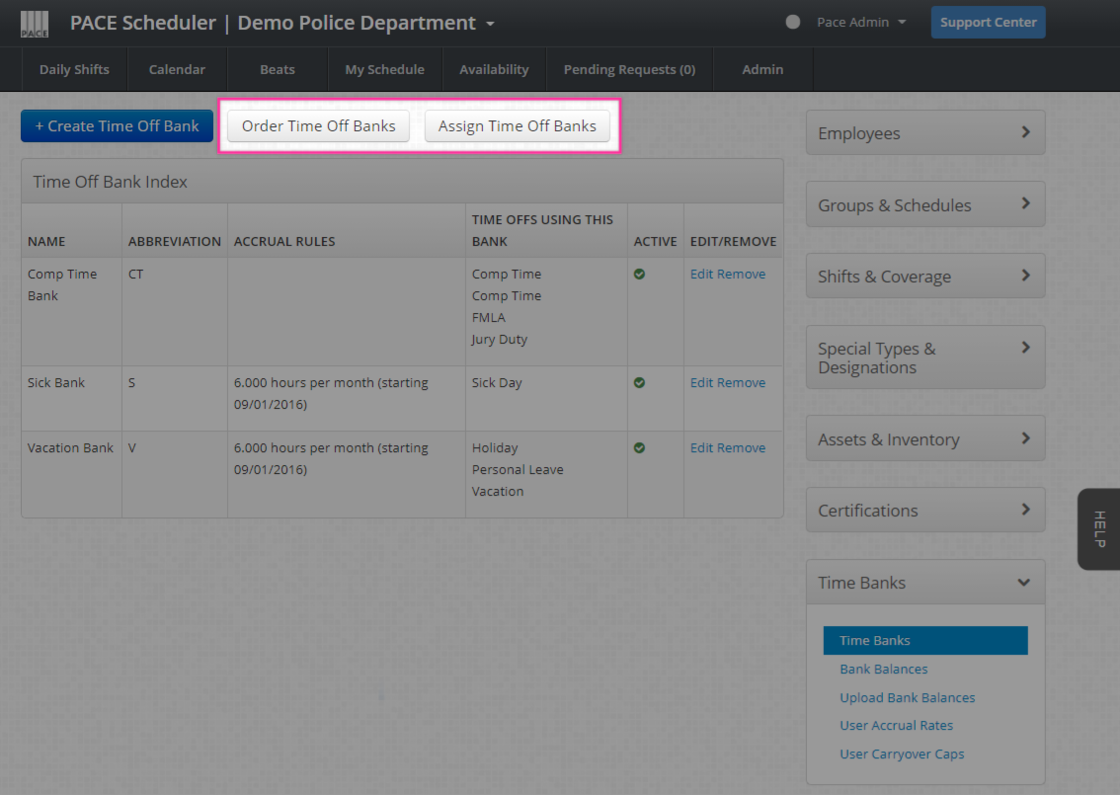 Good UI (User Interface) and good UX (User Experience) are what make a piece of software intuitive and pleasant to use. We've recently introduced numerous improvements to our UI/UX. There are too many to list here, but you should notice a cleaner, more consistent, and more thoughtful interface in several areas of the site.

Behind the scenes improvements to carryover caps and balance caps

Our dev team applied some magic behind the scenes so carryover caps and balance caps should be a bit more consistent/predictable now.

We take great pride in our customer support, and are always trying new ways to improve it. Today, we have an update that should improve a huge portion of our support flow. Welcome the Pace Scheduler Support Center!

This update will be deployed sometime next week (05/17 - 05/23). We'll post another update once it has been deployed.

Why are we adding it?

Emails are ok, but they are pretty limited in their capabilities, and can be unreliable. They are still important to have if needed, but there has to be a better way to communicate with all of the departments we serve. Therefore, we are introducing the Support Center.

It's a brand new offering of Pace Scheduler that allows you to submit, manage, and respond to support tickets in a much more effective and ordered way than emails alone.

Our email support isn't going anywhere, but with the new Support Center, you'll have a much more streamlined way to communicate with us, and vice-versa. You can submit new tickets, view your tickets' statuses, receive email notifications about any updates to your tickets, and keep all of your electronic communication with us in one place. You don't have to dig through tons of emails to find the message you're looking for anymore.

It's also where you'll find our brand new Knowledge Base! Support articles now have outlines that let you skip to exactly the topic in the article you need, no more scrolling to find the section relevant to your question. Each article has a rating system at the bottom as well, so you can let us know how effective our articles are.

How does it work?

The Support Center will automatically recognize you when accessed from your Pace Scheduler site. You'll be prompted to confirm your User Name the first time you log into it. The new Support Center button will be in the top-right of your site. 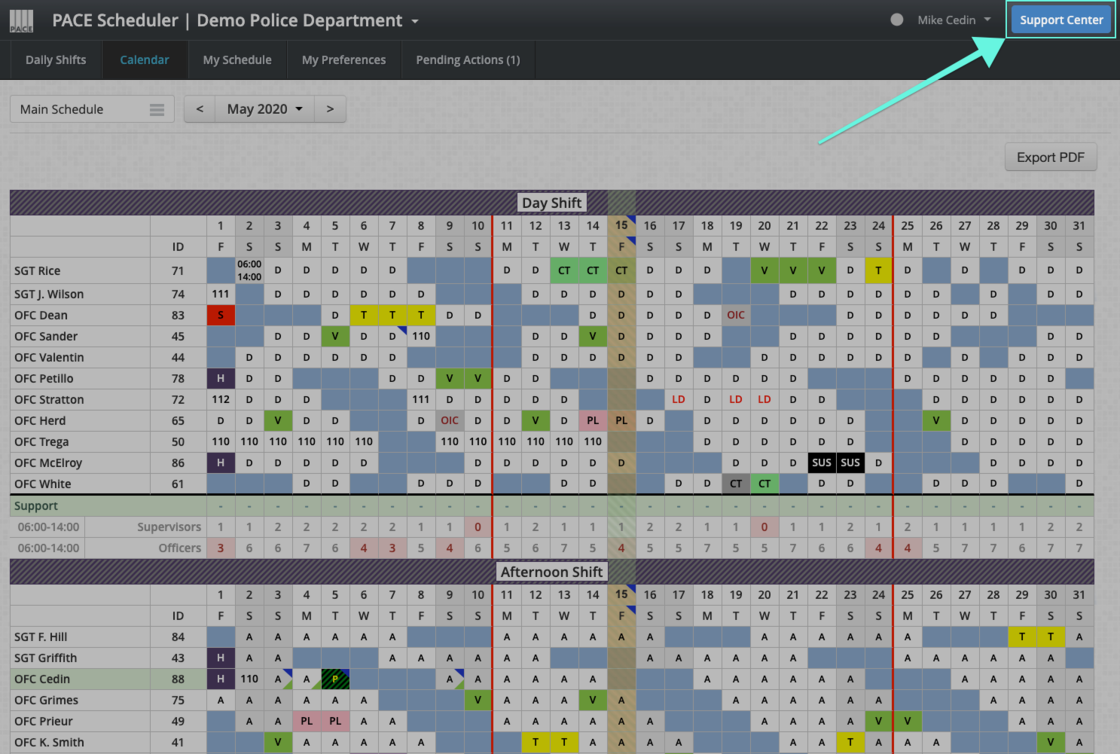 From the home page, you can access and search our Knowledge Base, create a new support ticket, manage and reply to your existing and past support tickets, and manage your Support Center profile and preferences. 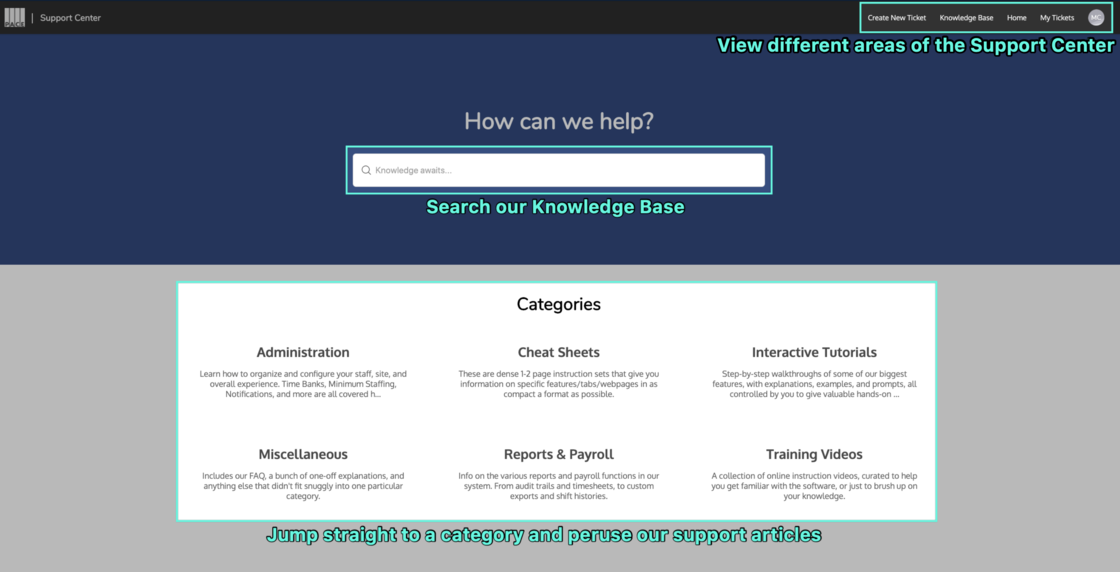 You can see tons of info about the tickets you sent us. Whether it's your turn to respond or ours, who your ticket is assigned to, what the status of your ticket is, and more. 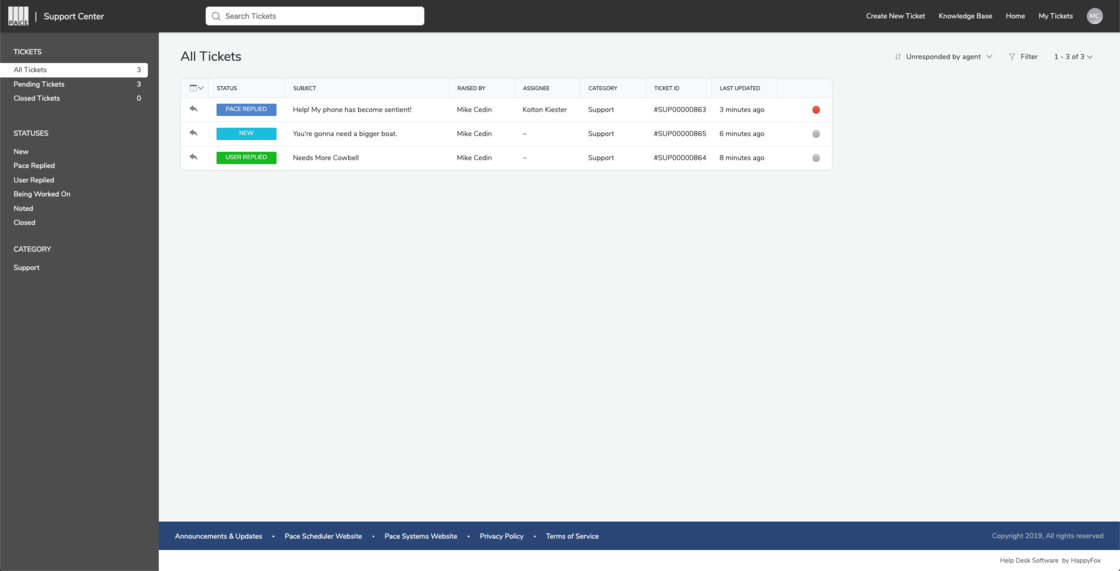 View and Reply to Tickets

View past messages and send us your replies right from the ticket! You can Cc others at your department, and their replies will appear on your ticket as well. 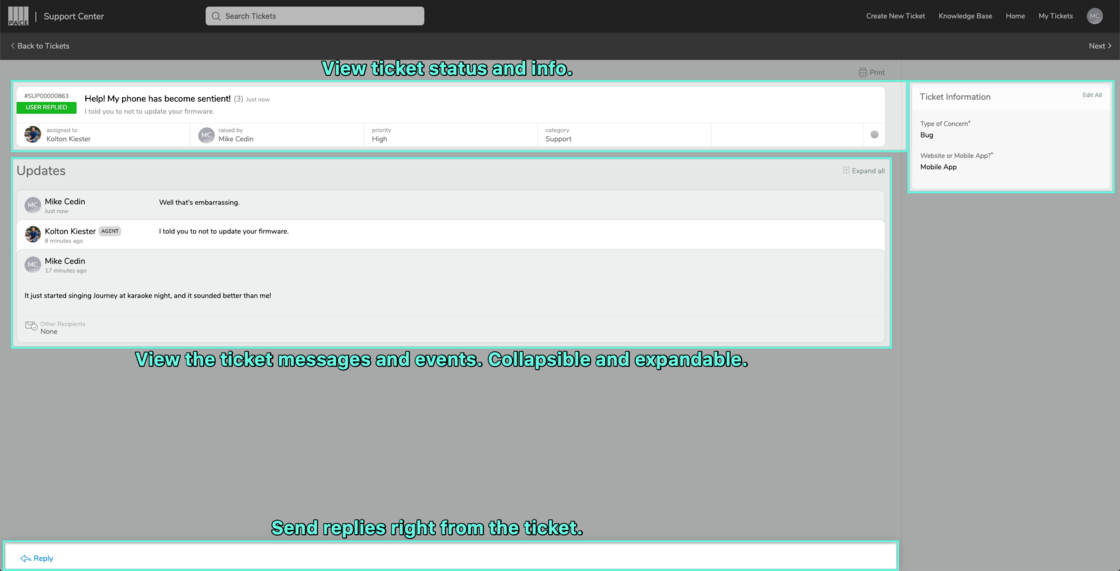 We hope you enjoy these new tools!

Admins and Supervisors can now see a user's email address when right-clicking their name cell on the calendar. Previously this would only show the cell phone number. On top of that, if you click that user's cell number or email address, it will pre-fill a Message Blast form aimed specifically at that person.

Similarly, if you want to send a Message Blast to an entire group on the Calendar, left-click the Group's name in the center of the screen. This will pre-fill a Message Blast form aimed at everyone in that group.

View a brief demonstration of all three methods

Previously, if a Lockout was in effect, a yellow banner would appear at the top of every calendar for every lockout, regardless of which dates it affected. This would become rather cumbersome if you had multiple lockouts throughout the year. To correct this, we now only show a lockout banner on a calendar period if that lockout actually affects that period. 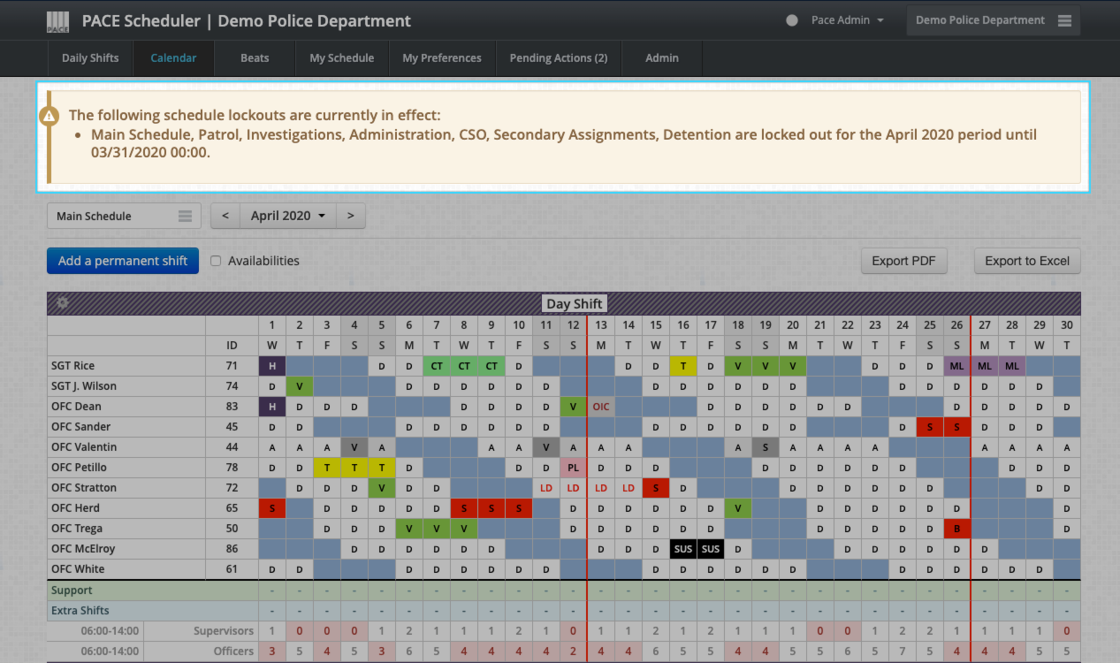 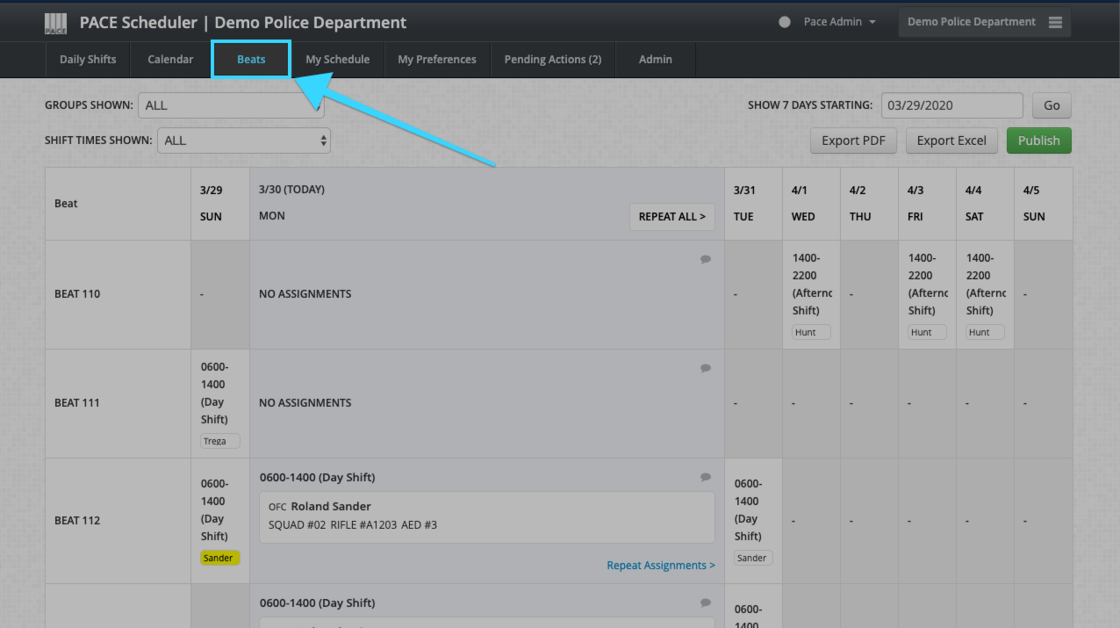 We reordered the categories in the Admin sidebar, so that they were a bit more logical. The items within each category are mostly the same, but you may notice a few tweaked labels and orderings. The three big ones we relabeled are… 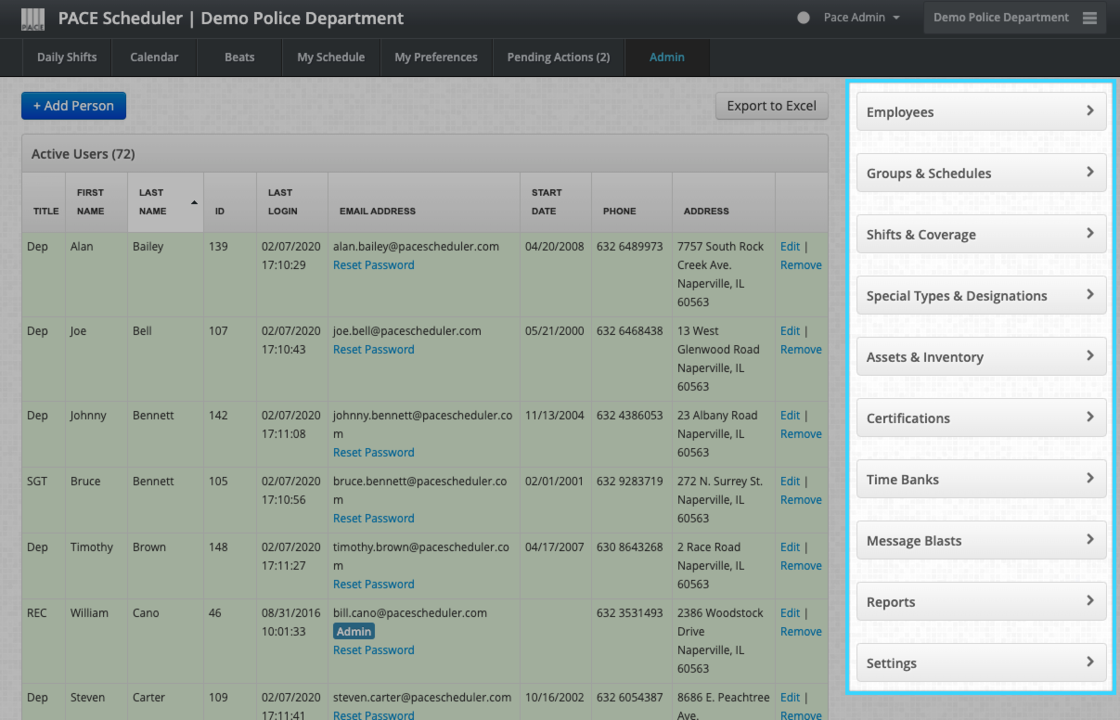 Nothing too drastic here, we just moved some items around on the user dropdown menu so it looks a bit more organized. 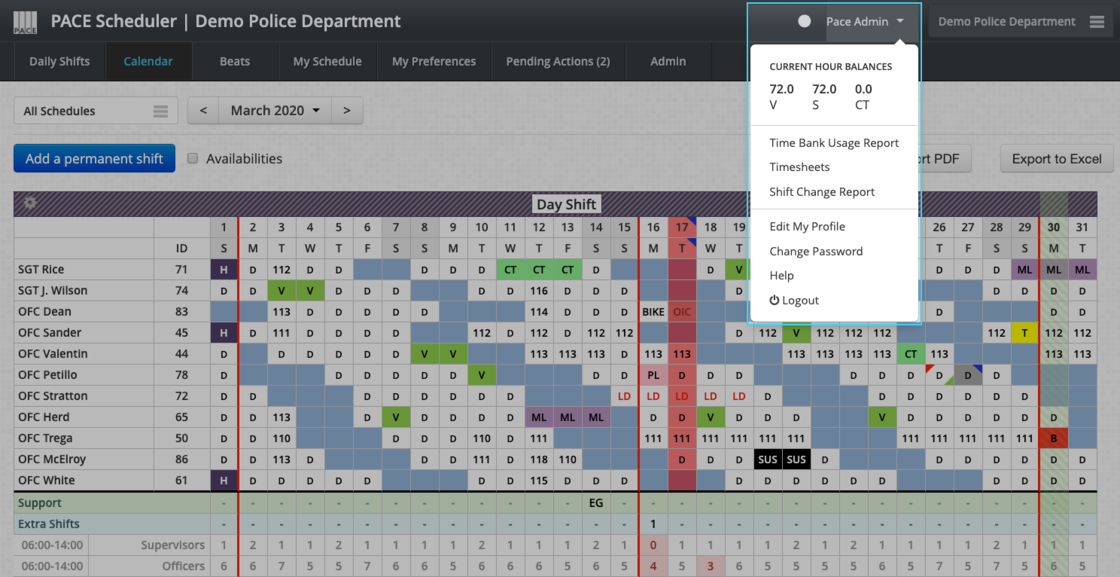